The venue for handball

The roof has a unique construction and the idea of an overlapping shell was used for the first time there. The concept of Kenzo Tange was a combination of Japanese and International styles that worked well in all his buildings and made them outstanding.

It was interesting to learn that in 1964 Tokyo hosted 5151 athletes from 93 countries, but the Olympic Games of 2020 will host 12,500 athletes from 205 countries! At the 2020 Olympic Games, the Yoyogi National Stadium will host handball, and at the Paralympic Games the venue will host badminton and wheelchair rugby. Сurrently, the leading positions in handball are occupied by teams from Denmark, Sweden, Norway, Germany, and France (men); and Netherlands, Spain, Russia, Norway, and Montenegro (women). The arena of Yoyogi Stadium’s capacity for both Olympic and Paralympic Games is 10,200 people.

Yoyogi National Stadium is located near Yoyogi Park, Meiji Jingu Shrine and Takeshita Dori, the famous youth fashion trading street. The NHK World studios are adjacent to the arena along the edge of Yoyogi Park. It has a big square out the front, which is used for different festivals.

During the Olympic and Paralympic Games it is recommended to use public transport. It's also important to consider that due to higher than normal volumes of passengers, getting to the venue may a take longer time than usual.

I love Japan very much! I like small towns of Japan where I can watch people doing their business and talk to them carefully. They're always friendly. I like Japanese gardens where I can just sit or walk and take my time. Also I like Shinto Jinja as being there I feel in peace. I like to watch sunsets and then to dine in some small local places. I like to soak into onsen after a long day of wandering. I like Japanese crafts very much as all items are made with great taste and skill. Nihon wo daisuki desuyo! My photos from Japan I also place here: https://gurushots.com/f10384/photos Matane! 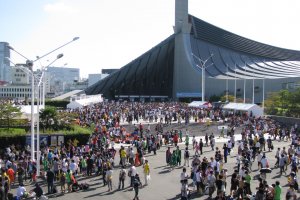 Sherilyn Siy 2 weeks ago
Classic design that has stood the test of time. Definitely a landmark in Yoyogi.
Reply Show all 0 replies

Kim B 2 weeks ago
It really does still look very modern!
Reply Show all 1 replies

Elena Lisina Author 2 weeks ago
Yes! I wonder how it was accepted in 1964?!
Reply
4 comments in total