Legends say that after a quarrel between Susanoo, the storm god, and his sister Amaterasu, the sun goddess, she retreated into a cave, casting darkness over the world. She was finally drawn out of the cave by the dance of Uzume, the goddess of revelry. From this mythic time until to today, dance has evolved in many different ways across the country and under various foreign influences, but one thing is for sure, dance has always been a part of Japanese culture.

Here is an overview of some of the type of dances that you can see showcased in Japan.

As the Emperor is said to be a descendant of the sun god Amaterasu, there has always been a strong link between the imperial court and the Shinto religion. As such, ritual dances to entertain the gods, kagura, were part of court customs. Originally, the dancers, wearing masks and decorated costumes representing gods and demons, told scenes from Japanese mythologies through dance. This style of dance was then introduced to the great shrines of Ise and Izumo and later spread across the country where it developed into many styles. Without realising it, you might have already seen some of these dances in action, like the lion dance (shishimai) or the shrine maiden dance (mikomai) that you might remember from the internationally acclaimed animated movie, Your Name ('Kimi No Na Wa').

During the Nara period, many elements of Chinese and Asian cultures were brought to Japan, such as gagaku music, accompanied by bugaku dance, characterized by its slow and regal movements. The dancers usually wear richly decorated costumes and can use various accessories such as a mask, hat, sword and butterflies wings. This dance style peaked during the Heian period and, as it was reserved for the aristocrats of the imperial court, it lost popularity when the political power switched from the Emperor to the Shōgun in the Kamakura period.

The best place to see these dances are shrines and temples, sometimes as the main event or as part of ceremonies. They can also be seen at venues such as Gion Corner and the National Theater of Japan.

A traditional Japanese bugaku performance at Itsukushima Shrine tells the tale of Ryo-o, the Dragon King, in front of the floa..

In the Akitakata district of northern Hiroshima there is a village where visitors are transported into a traditional Japan full..

Shirasagi-no Mai is a beautiful ceremonial procession performed at Senso-ji Temple and dates back over 1000 years.

The origin of many Japanese folk dances have close connections with Buddhism as they might have originated from the dances performed by the nuns and monks as well as practitioners. Japan's most popular dance is the bon Odori, performed during Obon, the Buddhist festival is in honour of one's ancestors' spirits. Nowadays, the link and association with religion has deteriorated and for many Japanese, the dance is an occasion to get a bit crazy and have a lot of fun.

Traditionally, the bon odori is danced around a tower-like stage (yagura) where shamisen and taiko drums are played. Many regions have their traditional songs, such as Tokyo Ondo in Tokyo and Kawachi Ondo in Kansai. However, more modern songs are also sometimes used like enka, J-Pop, disco and anime-themed songs.

Folk dances have various origins and modern dance events often feature groups of dancers performing through public streets or on a stage. Many regions have their own styles of dance, but the most famous ones are practised and performed across the country.

The best place to see bon odori and other folk dances are at festivals (matsuri), especially during Obon in August, however, many events also take place throughout all of the warmer months.

You might also like to head up north to Hokkaidō to see the traditional dance and music of the Ainu.

This Awa Odori is an amazing festival rich of culture and history, but the celebration doesn't end when the festival closes...

Yosakoi is a dance festival in Kochi every August. It is a Carnival-like kind of party with a unique Japanese influence only Kochi..

The largest drum parade in Japan

Hanagasa Matsuri is a dance festival which originiated in Obanazawa but is now celebrated across Yamagata every summer.

The Aoba Matsuri is Sendai's largest festival after Tanabata. A samurai procession, dancers, and various events can be enjoyed..

Eisa in Okinawa is a ageing tradition but still a very vibrant and prominent part of Okinawan tradition.

One of the traditional dances performed on stage is nihon buyō, which attempts to tell stories with dancers conveying emotion and the story through their movements rather than by their voice. It is divided into different genres, from the flamboyant Kabuki buyō that is danced in typical kabuki settings, makeup and costumes, to the toned-down su odori with dancers dressing in plain kimono and using a fan as their main prop. The fan can be used to represent various objects such as a bow, flute or even a sake bottle. There is also a more modern version, sōsaku buyō, that include original themes and choreography.

But if we are talking about professional entertainers, then we also have to mention one of Japan's symbols of elegance, the geisha, who have to complete training to become accomplished musicians and dancers. They have their own genre of nihon buyō, the kamigata mai, that is typically considered slow and gentle; adding the geisha's own refinements to the dance. This kind of dance can be performed at a private party or a larger stage during events in the year.

Modern time also saw the rise of new genres, such as the musical theatre of the all-female troupe Takarazuka Revue, that have performed since 1914, or the modern and grotesque butoh, created in Japan in the 1960' and now performed around the world.

A Visit to the Takarazuka Theater

The Takarazuka Theater offers spectators colorful performances, but did you know all performers are females?

At Gion Corner in Japan's ancient capital of Kyoto, you can see a showcase of seven traditional Japanese performing arts.

Despite being in Japan, you can find various other types of dances that don't have their origins rooted in Japan. If I say carnival, would you think of Japan? Most likely not, but there is actually a famous samba carnival in Asakusa. Or maybe you would prefer to see ballet from a dance company like Tokyo Ballet? You might even have the chance to see performances from high school students who participate in a nationwide competition, such as the Tomioka Dance Club from Osaka who made headlines in national television.

There are many types of dance in Japan and those listed in this article are only a select few. If you like dance, there are many opportunities to see performances or even to learn some new moves and dance yourself. As the famous song that accompanies Awa Odori says: "The dancers are fools, The watchers are fools, Both are fools alike so, Why not dance?"

Different floats with people in fascinating costumes on them including people singing or playing various musical instruments. There's.. 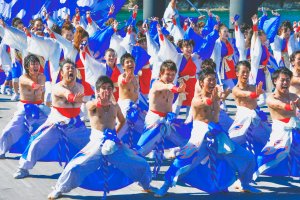 Questions about this Guide?

Sherilyn Siy a week ago
My favorite are the summer bon dances -- they're slow enough to follow and they're danced to old nostalgic sounding music (In our neigborhood, I think they play them from old records).
Reply Show all 0 replies
1 comment in total
Back to Contents